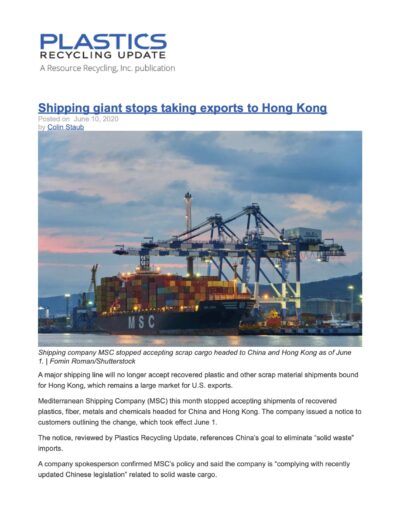 China banned most categories of scrap plastic imports beginning in 2018, and U.S. exports to the country have dwindled to a negligible amount. But Hong Kong remains a significant outlet for U.S. plastic: From January through April of this year, the most recent period for which figures are available, the U.S. exported 31.7 million pounds of scrap plastic to Hong Kong, about 8% of all U.S. plastic exports during that period.

Whether the Chinese solid waste law ultimately applies to Hong Kong or not, the MSC notice indicates the company will not carry scrap loads to that region.

MSC said China’s legislative change is “applicable to all solid waste goods such as wastepaper, waste plastics, waste metals, waste chemicals, among others.”

The notice also quoted Chinese government information stating that cargo carriers will be jointly liable with importers for violations of the import ban, a change from previous enforcement practices.