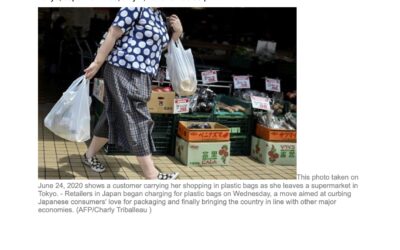 Retailers in Japan began charging for plastic bags Wednesday, a move aimed at curbing Japanese consumers’ love for packaging and finally bringing the country in line with other major economies.

Shops including the ubiquitous convenience stores can decide how much to charge customers for the bags, with a common price being three yen (around three US cents).

The new rule seemed to be having some effect, with one shopper telling public broadcaster NHK: “I buy things at a convenience store every morning. I knew the charge was starting so I brought my own bag.”

Visitors to Japan are often surprised by the amount of packaging involved in even the most basic of transactions — most convenience stores wrap individual bananas in plastic.

The country produces more plastic packaging waste per capita than any nation apart from the United States, according to the UN, with campaigners criticizing Tokyo for moving too slowly on reducing plastic consumption.

Introducing a nationwide fee “is aimed at prompting people to think twice if a bag is really necessary and helping people to review their lifestyles,” the government said.

Japan touts an enviable waste-management system, and the government says more than 80 percent of its plastic waste is recycled.

But much of that “recycling” involves simply incinerating plastic, often to produce energy — a process that generates carbon dioxide and contributes to climate change.

According to government data, bags account for two percent of the total amount of plastic waste.

Any cookies that may not be particularly necessary for the website to function and is used specifically to collect user personal data via analytics, ads, other embedded contents are termed as non-necessary cookies. It is mandatory to procure user consent prior to running these cookies on your website.